It was fun and a pleasure to be interviewed by Richard Brown for his Channel (Consciousness Life!) in YouTube.

You can watch and hear the interview here:

For those speaking English, The Stanford Encyclopedia of Philosophy is an amazing resource for philosophers and people interested in philosophy in general. The Sociedad Española de Filosofía Analítica has been working on a parallel encyclopedic project in Spanish. Now is coming online. At the moment, only a few articles are available. But many more are expected!

I am really glad to have contributed to this project by writing two entries:

Thanks to the British Academy Project. We will be organizing a workshop on April 14th on Perceptual Discrimination and Consciousness.

You can find the program http://www.filosoficas.unam.mx/sitio/discriminacion-perceptiva-y-consciencia Perceptual discrimination in the light of consciousness, cognitive access and
attention

Abstract:
Key debates in recent philosophy of mind and cognitive science concern the
relations between three aspects of our mental lives: (1) perceptual experiences,
such as the experience of conscious seeing; (2) the cognitive mechanisms
underlying our ability to form perceptual beliefs and report what we are perceiving;
(3) attention. For example, is perceptual experience independent of cognition, and
does attention alter the character of perceptual experience?
The main purpose of this project is to investigate the implications of the way in
which these three elements interact for theories of our ability to perceptually
discriminate objects. This ability is essential to the way in which we navigate the
world and acquire knowledge about our environment.

Posted on September 19, 2015 by Miguel Sebastian

After a long time I am updating the web page.

I am very happy to announce that the Minds Online Conference is ongoing. I will be presenting a paper I wrote with Marc Artiga on Informational Theories of mental content and Metacognition. The discussion will take place within the Philosophy of Neuroscience and Cognitive Science Session. You can see video of the paper and join the discussion HERE!

Posted on December 20, 2013 by Miguel Sebastian

My paper “Dreams: an empirical way to settle the dicussion betwween cognitive and non-cognitive theories of consciousness” is forthcoming in Synthese!

Attention Alters Appearances and Solves the ’Many-Many Problem’: Implications for the Research in Skill Acquisition

Attention Alters Appearances and Solves the ‘Many-Many Problem’: Implications for the Research in Skill Acquisition (with R. Sánchez)

How Experiences Should be Individuated: A Defense of Contrastive Individuation

How Experiences Should be Individuated: a Defense of Contrastive Individuation

The non-transitivity of the relation looking the same as has been used to argue that the relation same phenomenal character as is non-transitive; a result that might jeopardize certain theories of consciousness. In this paper I will argue against this conclusion, granting the premise, by defending a contrastive criterion for individuation
of phenomenal characters.This criterion forces one to dissociate lookings and phenomenology, what some might find counterintuitive. However, this intuition is left unsupported once one distinguishes phenomenology and cognitive access; a distinction that is conceptually and empirically grounded.

Self-Involving Representationalism: In favor of a Weak Interpretation of Hume’s Observation

One of the most famous Hume’s quotes regards the relation between perception
and oneself:

Hume’s Observation: I never can catch myself at any time without a perception,
and never can observe any thing but the perception. Hume (1739, p.252)

Most people tend to agree with Hume’s observation, but disagree on the metaphysical
conclusions to be derived from it: do selves exist? Are selves mere
bundles of perception? Do they in endure? In this paper I am not interested
in these metaphysical questions but rather in phenomenological considerations;
and in particular whether there is such a thing as consciousness of oneself as
a self, that is, as a subject of the experience, a possibility that has been rejected by Jesse Prinz.

This paper is organized in two sections. In the first one I argue in favor of
a weak reading of Hume’s observation. The force of Prinz’s arguments against
some of his opponents, and in favor of a stronger reading, rests on the failure
of his opponents to provide a reductive understanding of what he calls I-qualia.
For this purpose I will offer a such a reductive account in the second section.

This paper was presented at the VII UNAM-UT Austin Meeting.

A presentation of the paper can be found here. 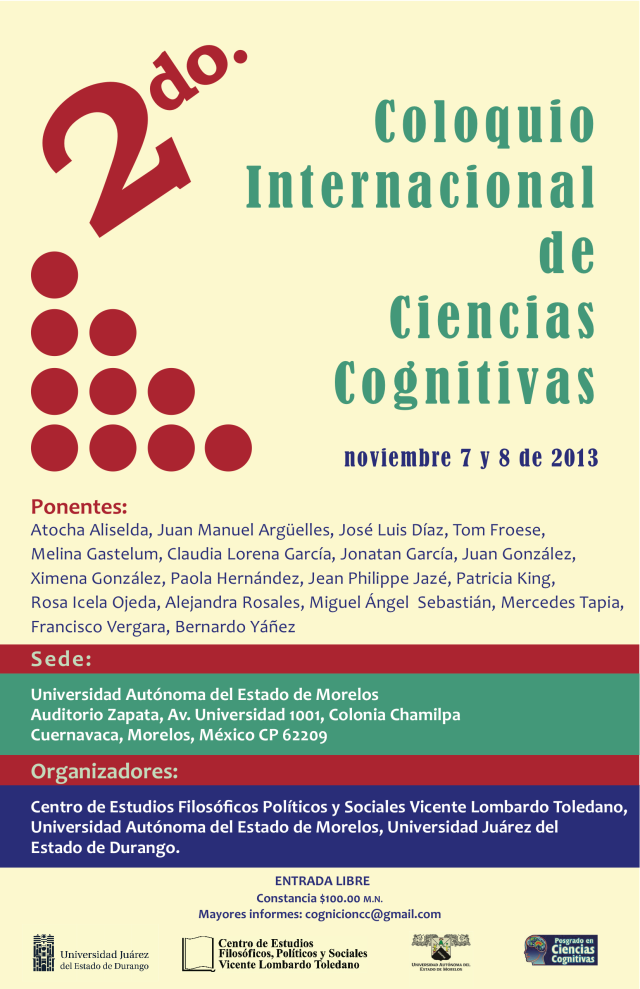 Image | Posted on October 30, 2013 by Miguel Sebastian | Leave a comment
Minding the Brain
Create a free website or blog at WordPress.com.